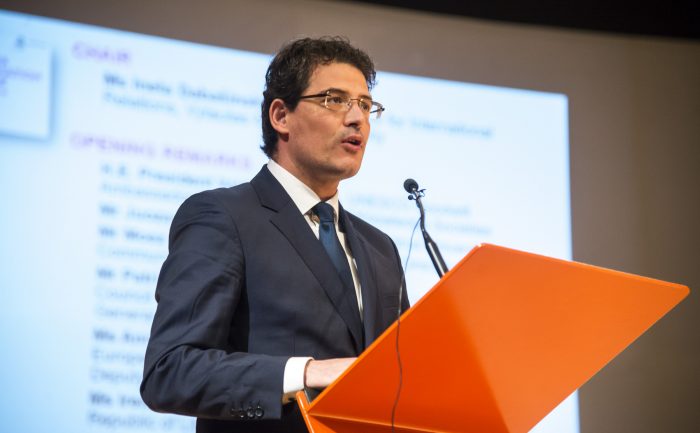 For the first time in the Baltic States and the Northern Europe, the Feature Conference of Global Media and Information Literacy Week was held at Vytautas Magnus University (VMU) in Kaunas, Lithuania on 24-25 October. The event, the 8th Media and Information Literacy and Intercultural Dialogue (MILID) Conference, welcomed about 300 participants from all over the world, including leading experts from the USA, France, Great Britain, and other countries.

Conference speakers discussed the changing media environment, the influence of the media on social and political processes, and the competences and skills necessary for sustainable social, cultural, economic and political development of the world.

At the event’s opening, VMU Rector Prof. Juozas Augutis rejoiced at the fact that the conference was entrusted to a university, as universities are a great place to discuss  media and its impact on democratic processes and social transformations.

“The digital world is becoming broader, and we need to understand how these processes work, understand this new reality, and not to get lost in the sea of information, nor fall victims for manipulations and separate what is intelligent from what is simply interesting. And while we need to adapt, there are certain principles that are universal: now it is time to repeat again how significant is the universal education that encourages openness”, VMU Rector said, highlighting the importance of liberal arts education in today’s world.

The conference’s audience was also congratulated by the VMU Vice-Rector for International Relations Prof. Ineta Dabašinskienė, who noted in her speech that joint efforts of all educational sectors are required in order to deal with the current challenges, e.g. with the observed trend that the youth does not consider long texts interesting, and perceive thinking and analyzing as a waste of time. The Vice-Rector argued that we must not turn our backs on classical literature.

“It is very important to make sure that certain elements of the past remain relevant in the present: otherwise we will lose the narratives that have created our civilization, like Shakespeare, de Servantes, and Chekhov to name just a few. Instead, people are captivated by screaming headlines, short-lived scandals and fake news, which is, in fact, not a new phenomenon. This is why Romeo and Juliet died. And this is why Mark Twain had to announce that the reports of his death were greatly exaggerated”, Prof. Ineta Dabašinskienė explained.

The conference was also attended by high-ranking UNESCO officials, which served to confirm that the UN Educational, Scientific and Cultural Organization continues to be a key actor in the fight for media freedom. The event’s speakers included Mr Moez Chackchouk, UNESCO Assistant Director-General for Communication and Information, and Mr Guy Berger, Director for Freedom of Expression and Media Development at UNESCO, Paris.

“Let’s take media and information literacy to the cities and let’s make all our work valuable everywhere in the country: the countryside, schools, colleges, factories, farms, offices and homes. Let’s take the world into a knowledge-rich future. Everyone needs to be a part of the change”, Mr Moez Chackchouk said.

Video recordings from the conference are available here.

The conference was organized by UNESCO, Vytautas Magnus University, University of Latvia (UL), and the national commissions for UNESCO in Latvia and Lithuania. Both VMU and UL are members of the UNESCO Media and Information Literacy and Intercultural Dialogue (MILID) Network.

“This acknowledgement is a result of VMU’s long cooperation with UNESCO and other international organizations in the field of MIL research and studies. In their development of media research, VMU scientists have been actively involved in UNESCO-initiated MILID and GAPMIL networks and the activities of international scientific associations ECREA, ICA, BAMR, and AABS”, one of the organizers, the head of VMU Dept. of Public Communication, Prof. Kristina Juraitė explained.

The theme of the conference, and of the entire Global MIL Week 2018, was Media and Information Literate Cities: Voices, Powers, and Change Makers. Discussions and paper presentations focused on education of media and information literacy in the Baltic states, MIL as mediator between cultural industries and the city, the transformation of information needs in the cities, privacy and bullying online, the impact of digital environments in the age of misinformation, the role of MIL in the struggle for gender equality and women’s empowerment, the fight against hate and intolerance etc.