VMU Opened the Largest University Sports Center in the Country 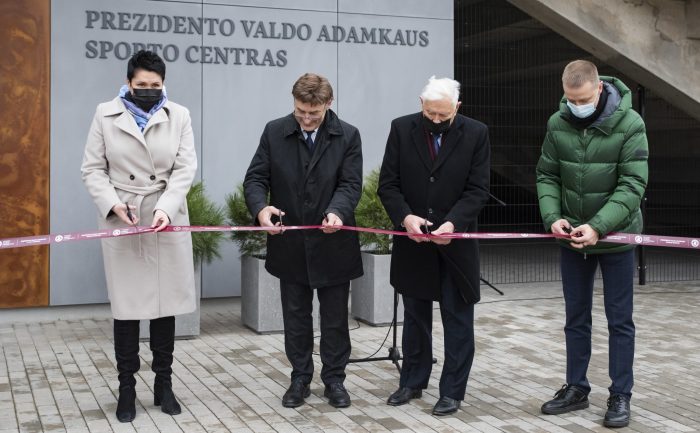 The grand opening ceremony of the President Valdas Adamkus Sports Center, which presented the largest university sports complex in Lithuania adapted to various sports and needs, took place at Vytautas Magnus University on November 17. The sports center, which has opened its doors in the Akademija campus (Studentų g. 9A, Kaunas district), will provide more opportunities to train professional athletes and to increase the physical capacities and health of the university community.

Inspirational words by the President for visitors

The Vytautas Magnus University sports center was symbolically named after Valdas Adamkus, VMU Honorary Doctor.  “The President is known as a man of sports – since his childhood in Žaliakalnis, Adamkus has maintained his connection with sports. Adamkus, who has been referred to as “the sportiest President” by the media, has been associated with various sports, including athletics, tennis, basketball and pool swimming. The President is a frequent visitor of sports events and a great friend of Lithuanian Olympians,” VMU Rector Juozas Augutis said at the event.

According to the Rector, although Lithuania has always been a land of sports, investing substantially in the development of physical education and sports, and the development of the necessary infrastructure, lately, we rarely hear about the opening of new sports centers. “It is therefore very exciting to open the doors of this new sports complex at the university and provide the community members with proper opportunities to play sports, study and improve,” said Professor Juozas Augutis, Rector of VMU.

According to President Valdas Adamkus, who attended the opening ceremony of the sports center, the involvement of sports in the education system will contribute to the full education of the young generation and will become the source of an all-round education. “We are participants and witnesses of a significant and historical event. This sports center will allow to apply theoretical knowledge to practice,” said President Adamkus, also revealing that to this day, he still tries to start every day with exercise. Future visitors of the center will be inspired by an idea handwritten by the President, stating that today, sports mark the unity of people and are a part of our culture – a part of a person, nation, and state.

This sports center will also play an important role in the study process as from 2022,  VMU will implement two new study programs. “The authentic and unique bachelor study program Sports Studies will allow to train a high caliber, competent, self-confident, modern sports coach.  And the new master study program Physical Education and Sports will help to improve formal and non-formal physical education, its attractiveness and accessibility by training qualified specialists,” said Simona Pilkienė, Vice-Rector for Studies. To date, Vytautas Magnus University has implemented sport pedagogy studies in the bachelor study program Subject Pedagogy and, together with the Euroleague Basketball Institute, has offered a master study program Sports Business MBA – the only one in Europe – for sports managers.

The developed infrastructure is expected to provide even more opportunities for University’s student athletes, among which are members of the Lithuanian Olympic community, multiple-time participants and winners of World and European championships, as well as participants and winners of Universiades and European and Baltic student games. Opportunities in sports activities will also be expanded by the signing and renewal of contracts that followed the opening ceremony of the President Valdas Adamkus Sports Center. From now on, Vytautas Magnus University will cooperate even more actively with Lithuanian Basketball and Football Federations, the 3×3 Basketball Association and the Žalgiris Basketball Center.

Various needs of athletes will be met

The sports complex consists of a grandstand building, a sports hall suitable for basketball, indoor football, volleyball, and other sports, a football stadium with running tracks and long jump sectors, outdoor basketball courts, a clay tennis court, an artificial grass tennis court, a sand volleyball court and a universal court. The outdoor grandstands are equipped with 1,000 seats.

The construction of the complex was started by the then Lithuanian University of Agriculture in 2006. “It is probably destined that the sports infrastructure in Lithuania has to go a long way. This project gained new momentum in the context of the consolidation of Aleksandras Stulginskis University, Lithuanian University of Educational Science and Vytautas Magnus University, as the Government of the Republic of Lithuania provided the necessary funds. On June 22, 2020, a works contract was signed, and on November 17, 2021, the sports complex was opened, ”said Jonas Okunis, Director of Administration at VMU.

The VMU President Valdas Adamkus Sports Center was designed by a team of architects from UAB Simper; the contractor was UAB Avadi. The value of the renovation works of the sports complex is 2.9 million euros.