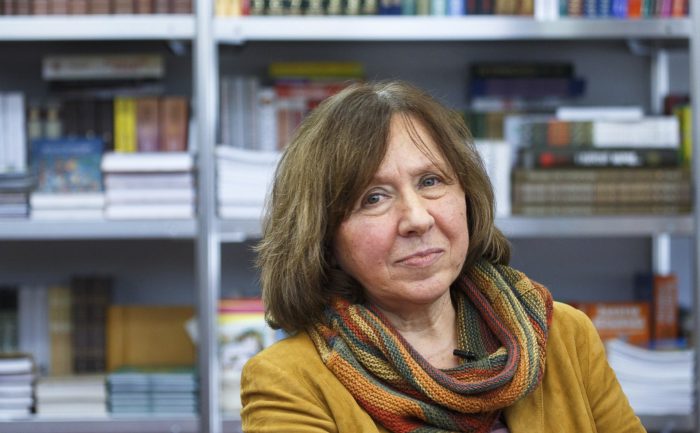 The Senate of Vytautas Magnus University (VMU) has granted the title of VMU Honorary Doctor in the field of the humanities to Nobel Laureate Svetlana Alexievich.

According to the university’s rector Prof. Juozas Augutis, VMU has always centered its identity around democracy and human and civil rights. “These values are an inseparable part of the academic community’s life not only when conducting research or studying, but also while actively participating in the discussion of the political and cultural events in the country, the region and the world, joining international organisations and defending freedom, justice, and autonomy: the ideals that the humanity achieved a thousand years ago, when it opened the first university and learned to live as a community”, Augutis claims, adding that all of these values are also very dear to Svetlana Alexievich, who has been fighting for them by using her “sharp quill”.

Svetlana Alexievich is a Belarusian writer, journalist and screenwriter who was awarded the 2015 Nobel Prize in Literature, becoming the 14th woman and the first Belarusian author to win this prize. According to the introduction by the Swedish Academy, which is responsible for the awarding of the prestigious prize, Alexievich was chosen “for her polyphonic writings, a monument to suffering and courage in our time”. The writer’s most famous books include documentary prose works The Unwomanly Face of War, Boys in Zinc and Voices from Chernobyl. Some of the latter book’s elements have been used in the famous HBO miniseries Chernobyl.

“Our university takes delight and pride in the fact that the honourable writer Svetlana Alexievich will accept the VMU Honorary Doctor’s regalia and intends to meet the community as soon as the circumstances will allow. This title of doctor honoris causa has been granted to the writer for her contributions in docu-fiction, consolidation of democracy and human rights, preservation of the people’s historical and multi-voiced memory, and for significant efforts in defending the values of freedom and justice”, the VMU rector said.

Svetlana Alexievich herself  has sent her best regards to the Lithuanians, saying that she is looking forward to meeting them, while also admitting that in her world, words have a special significance and power. “Dear friends and peers, thank you for the honour you have shown me. Sometimes people call me a writer of catastrophes, but in the realm of the Word, I feel differently, I feel like a collector of human spirit. I spent my childhood and adolescence in a Belarusian village and, for my entire life, I have remembered how my heart melted when witnessing the story of a simple peasant, who discovered her own words to talk with God. Those words were so bright and had such power that I always look for it in the real life, in the secret which is protected and which lives inside each of us. This is how the idea was born to write novels from live voices, from how each of us acquires a human being inside of us. In our times, as we face new challenges – new revolutions and cosmic texts written by the mysterious Covid, I am delighted to be with you and look for a human inside a human”, Alexievich said.