VMU Exhibition: 100 Years of the University and Those Who Created It 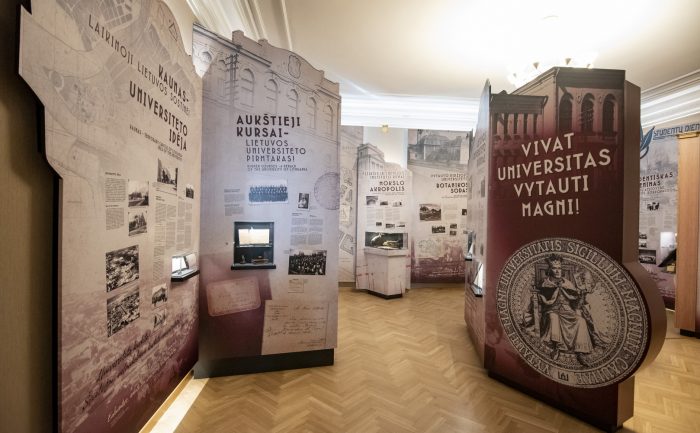 Last Thursday, April 28, marked 33 years since the re-establishment of Vytautas Magnus University (VMU) in Kaunas. This year, the University also commemorates the centennial of its founding: 100 years ago, the University of Lithuania was established, which was later renamed Vytautas Magnus University. On this occasion, the exhibition “Vivat Universitas Vytauti Magni!” dedicated to the 100th anniversary of the university was opened at the VMU’s Rectorate building. Through photographs, it reminds of the life of the university from its foundation, interwar activities to its re-establishment in 1989 and its present-day works. The exhibition will open its doors to the general public in May.

When presenting the exhibition, its author, historian Arvydas Pakštalis, says that it aims to briefly present the complex and long history of the university and the personalities who created it.

“When we were thinking about the creation of this space of remembrance, we took into account that it was rather small, even though the university has existed for more than 100 years. The university is a complex mechanism. Prof. Antanas Kulakauskas’ book “The First Lithuanian Alma Mater: A Brief History of the Classical University of Kaunas” is a great example of how a complex mechanism and its many years can be laid out in an excellent work. That was our aspiration as well,” Pakštalis explains. 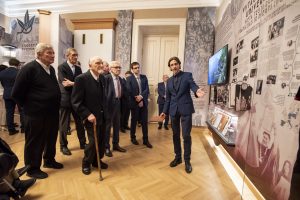 The University of Lithuania was established in 1922, after reorganizing the Higher Courses in Kaunas. It was the only Lithuanian higher education institution that had become the center of the country’s culture, science and modern and free intellectual thought.

VMU Rector prof. Juozas Augutis notes that both events illustrated in the exhibition – the establishment of the University of Lithuania in 1922 and the re-establishment of VMU in 1989 – were very important for independent Lithuania, turning it towards Western civilization, science and culture.

“The new Lithuanian intelligentsia was formed at the interwar university. After graduating from Vytautas Magnus University, Lithuanian sons and daughters began to create modern Lithuania. Unfortunately, wars and occupations destroyed their hopes and lives. We are not protected from these disasters even today, especially when seeing people die and hospitals and universities getting demolished right here, with our Ukrainian neighbors,” prof. J. Augutis points out.

Professor Algirdas Avižienis, the first elected rector of the re-established VMU, notes that the University of Lithuania played an important role in the return of Lithuanians who were studying in foreign universities. “That is why we were able to establish the University of Lithuania. Because Lithuanian sons and daughters returned from European universities and created a perfect and truly necessary university, the first one in the world where the language of instruction was Lithuanian,” the professor maintains.

The new Lithuanian intelligentsia and communities of civil servants, lawyers, engineers, financiers, scientists, artists, writers and teachers were formed at the University of Lithuania (since 1930 – Vytautas Magnus University). Teachers who formed the new Lithuanian education system played a particularly important role. The university served as the foundation for modern higher education institutions. 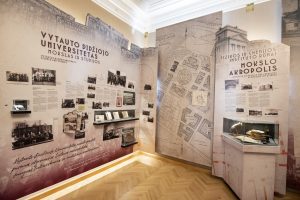 After the Soviet authorities closed the university in 1950, the academic tradition of VMU continued to develop in the diaspora. In 1989, with the joint efforts of Lithuanian and diaspora scientists, Vytautas Magnus University was re-established. The conference “National Conception of Higher Education Institution and the University of Kaunas”, which took place on April 26-28, 1989, was the decisive step in the re-establishment process. During the conference, the act of re-establishing VMU was proclaimed by Lithuanian and diaspora scientists.

Jurgis Vilemas, the first academician to serve as VMU rector at the re-established university, notes that 1989 was highly favorable for the re-establishment: the spirit of freedom prevailed, which was not hindered by bureaucracy or other obstacles.

“1989 was an exceptional year, most people could open ministers’ doors with their feet and no one was punished. The timing of the re-establishment of the university was perfect – if we had done it a couple of years later, I doubt we would have succeeded. Later, new bureaucracy and new procedures intensified, whereas then it seemed as if you could move the mountains. No one believed it would work – you could say a miracle happened,” Acad. J. Vilemas says.

The days of the re-establishment, according to the academician, were tense – there was no funding for some time. “We had announced the admission of students before the government resolutions, after which the first funds were provided. Just imagine: you have nothing, no premises, no money, and 800 student applications are already accepted,” Acad. Jurgis Vilemas recalls. Later, the university also received support from unexpected sources – for example, a deportee who spent many years in Siberia and was almost 100 years old donated almost all of his accumulated pension to VMU.

VMU Rector prof. J. Augutis points out that the re-established university was not only the first in Lithuania to implement the Western system of liberal studies, but also one of the first institutions to operate in interwar Lithuania and later re-establish its activities. This led to a big wave of re-establishment of institutions, organizations, associations, parties and movements that operated in independent Lithuania. This was one of the victories of the Sąjūdis, which strengthened Lithuania’s faith in the restoration of independence.

The most comprehensive university in Lithuania today

“Today marks exactly 33 years since VMU was re-established. Having started with 177 freshmen, the university has grown into one of the most comprehensive universities in the Baltic region. We have come a long, winding and difficult way to have what we have today. It commits us to continue our work and becomes the starting point for future aspirations. This is the merit of all those who have worked and still work, who have studied and still study at the university as well as social partners and patrons,” said VMU Rector thanking the university community, friends, partners and sponsors.

VMU became the most comprehensive university in Lithuania in 2019, when it merged with Lithuanian University of Educational Sciences and Aleksandras Stulginskis University after the reform of higher education. VMU cooperates with more than 500 partner universities in various countries of the world and carries out more than 30 joint double degree programs and three international joint programs. The university is a member of the “Transform4Europe” alliance, which unites seven European universities.

On the occasion of the centennial – events throughout the year

On the occasion of the centennial of the University of Lithuania and the anniversary of the re-establishment of VMU, on April 28, a solemn meeting of the VMU Senate took place, during which the medals of the 100th anniversary of the University of Lithuania were awarded for long-term work at Vytautas Magnus University, significant scientific achievements, social activities, and promotion of the university’s name. The gold medals were awarded to Professor Ineta Dabašinskienė and His Excellency Metropolitan Archbishop of Kaunas and Great Chancellor of the VMU Faculty of Catholic Theology Kestutis Kėvalas. Eleven more members of the university community were awarded silver medals. Prof. Indrikis Muižnieks, the rector of the University of Latvia, was also awarded the Centennial medal.

During the event, Romualdas Požerskis, a photo artist and professor at the VMU Faculty of Arts, was awarded the VMU Honorary Professor regalia.

“I’ll admit: I feel strange, this moment is probably the Everest of my entire life. I am anxious about descending from this huge mountain… This honorable award is not only my merit. I would not have reached this peak without you. I want to thank the entire community of the university, and especially my wonderful colleagues at the Faculty of Arts. I feel all the staff of the faculty standing here with me. My sincere thanks goes to them,” said prof. R. Požerskis as he accepted the regalia.

In the evening of the same day, the concert “Vivat Universitas!” took place at the Kaunas State Philharmonic, the program of which was performed by a joint symphony orchestra of students and alumni of VMU Music Academy and students of Juozas Naujalis Music Gymnasium (conductor Prof. Jonas Janulevičius), VMU Academic choir “Vivere Cantus” (head Assoc. Prof. Rolandas Daugėla) and students of the Singing department of VMU Music Academy.

To commemorate the centennial of the University of Lithuania, Vytautas Magnus University invites to participate in events dedicated to this occasion throughout the year: concerts, exhibitions, conferences, cultural events as well as various initiatives. The events are free of charge and open to both the university community and the general public.