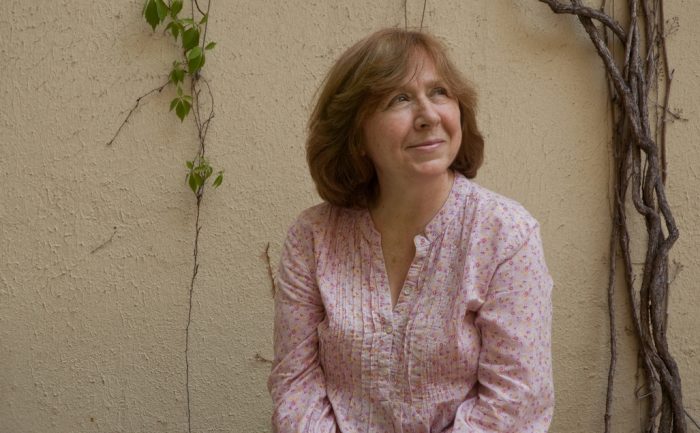 On Wednesday, 21 September, at 2 p.m., during the solemn meeting of the Senate of Vytautas Magnus University which will take place at VMU Aula Magna (Gimnazijos g. 7, Kaunas), Svetlana Alexievich, the winner of the Nobel Prize in Literature, will be awarded the regalia of VMU Honorary Doctor.

“The community of Vytautas Magnus University is enriched by a personality who seeks to preserve people’s historical and multi-vocal memory and who makes significant efforts to defend freedom. Svetlana Alexievich will be awarded the regalia of VMU Honorary Doctor for her significant contribution in the fields of documentary fiction and the strengthening of democracy and human rights, as well as for upholding the values of justice,” said the Rector of VMU Prof. Juozas Augutis.

Svetlana Alexievich will start her visit to Lithuania in Kaunas. On 21 September, the writer will be awarded the regalia of VMU Honorary Doctor, and on Thursday, 22 September, at 6 pm. Alexievich’s meeting with the public will be held in the VMU Great Hall (S. Daukanto g. 28). This meeting is part of the new autumn series of events “Šeteniai Readings” of the international festival of writers and books Kaunas Literature Week organised by VMU. The first part of Šeteniai Readings held on 15 September featured a meeting with the Ukrainian writer Jurij Andruchovyč, who presented his essay “Captive Madness: the Anti-World” in an open lecture specially written for this occasion. Against the backdrop of Ukraine’s resistance to aggression, the writer elaborated on the insights of C. Miłosz’s “The Captive Mind.” The international festival of writers and books Kaunas Literature Week is part of the Kaunas – European Capital of Culture 2022 programme.

Svetlana Aleksandrovna Alexievich was born in the city of Stanislav – later renamed Ivano-Frankivsk – in western Ukraine. Alexievich has been particularly interested in and has written about the dramatic events of the Soviet era and the experiences of her own generation – the war in Afghanistan, the collapse of the Soviet Union, the Chernobyl catastrophe and its aftermath, and in recent years has become known as an active critic of the Belarusian dictatorial regime. Forced to leave the country in 2000 due to political persecution, she later returned, only to leave again in 2020 after the suppression of the Belarusian Revolution. Alexievich has created a unique genre of documentary literature, which she calls the “novel of voices.” Based on hundreds of interviews, it allows to create a broad realistic and spiritual panorama of the present from authentic accounts. Alexievich’s books have been translated into more than fifty languages. As many as five of her books have been published in Lithuanian: “Last Witnesses”, “The Unwomanly Face of War”, “Secondhand Time”, “Chernobyl Prayer”, and “Boys in Zinc”. Based on the latter two books, director Eimuntas Nekrošius has created a theatre performance.