Scholarships and Doctoral Diplomas Awarded at the VMU Senate Meeting 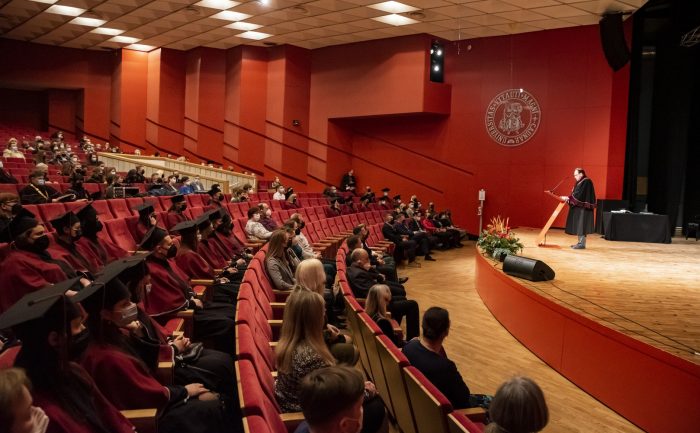 On Wednesday, March 23, a solemn meeting of the Senate was held at the VMU Great Hall, during which nominal scholarships, Vytautas Magnus University doctoral diplomas and insignia, and Professor’s and Associate Professor’s Certificates were awarded. The meeting was chaired by Prof. Ričardas Krikštolaitis, Chair of the VMU Senate.

At the beginning of the meeting, Prof. Krikštolaitis reminded that this year marks the centennial of the University of Lithuania, but all thoughts in the world and Lithuania are currently focused on Ukraine. The professor invited the community to observe a minute of silence for Ukrainian creators, fighters, defenders of freedom, members of the academic community and their loved ones.

“With the jubilee year only having started, for which hundreds of bright initiatives are planned, we face a sense of fragility and temporariness. At the moment, as we are gathered here now, unfathomable acts of aggression are taking place in the world. What has been built for centuries is now brutally being destroyed and devastated. It does not take a hundred years to destroy what has been built for centuries. Against this background, our festive and daily works take on a different meaning, their boundaries expand and take on different forms,” said the Chair of the VMU Senate.

Addressing the attendees of the Senate meeting, VMU Rector Prof. Juozas Augutis noted that celebration is taking on a different tone against the background of the current world events. “Celebration transforms into turning to one another and expressing gratitude for what we have today. Many of us reconsider the priorities we have had until now, with the spirit of unity and solidarity and the search for meaning now coming to the fore,” said the Rector, also recalling the words of VMU Honorary Doctor Česlovas Milošas about not giving up: “Even if tomorrow is the end of the world, it’s still time to plant your apple trees.” Prof. Augutis wished the attendees of the meeting peace, solidarity, faith, and hope.

In 2009, on the occasion of the 20th anniversary of Vytautas Magnus University’s re-establishment, the University Senate founded Vytautas Magnus University Nominal Honorary Scholarship which is awarded annually to the most advanced VMU students who have particular achievements in scientific, art, creative, sports and (or) social activities that represent their Alma Mater in Lithuania and abroad. During the meeting, these scholarships were awarded to Marius Bytautas, Tomas Genevičius, Kristina Jeganian, Gabrielė Kasputytė, Aurimas Kavaliauskas, Jolanda Marčiukonytė, Alma Petrauskaitė, Serena Resuli and Greta Šadeikytė.