“It is good to be born in a small country where Nature was on a human scale, where various languages and religions cohabited for centuries. I have in mind Lithuania, a country of myths and of poetry.“ (From Czesław Miłosz’s Nobel rize acceptance speech in 1980)

Czesław Miłosz was born on June 30, 1911 in Šeteniai (Kėdainiai Distr.). He started learning in the Zygmunt August gymnasium in Vilnius in 1921 and graduated from the Faculty of Law in Vilnius’ Stefan Batory University in 1934. In 1937 he moved to Warsaw, where he lived through the years of the second World War. After the war ended, Miłosz became a diplomatic attaché for Poland in New York and Washington, but suffered from the growing oppression in the communist Poland. After being assigned to Paris in 1951, he requested political refuge there. For ten years, he lived and wrote in France. In 1960, he moved to North California in the USA and worked at the University of California in Berkeley. The poet, writer and literature scientist Czesław Miłosz received the Nobel Prize in 1980. In 1992, he was awarded the title of VMU Honorary Doctor. Miłosz died at the age of 93 on August 14, 2004 in Kraków, Poland and was laid to rest in that town as well. Miłosz’s works have been translated into 42 languages.

I did not expect to live long enough to see Lithuania again. I knew that empires were not ever-lasting; however, the Soviet empire was supported not only by a huge army and the most powerful police in the world but also by numerous intellectuals in the West. Disagreeing with them, I was reluctant to travel to Moscow and Soviet-occupied countries, but now I am grateful that destiny has brought me to a free Lithuania. Having struggled persistently for independence, the Lithuanian people attained it. Goliath lost in the duel with David.

I am glad to receive an honorary degree at Vytautas Magnus University for special reasons. Important administrative and professional positions at this university were held by Michael Rdmer, whose political ideas exemplified a broad and courageous perspective on the question of nationality.

Another extraordinary personality was associated with, and honored by, Vytautas Magnus University: Oscar Milosz, who, though a distant relative, treated me like a son and exerted life-long influence on my creative work.

We are nearing the end of a century marked by mass insanity and crimes against humanity. The outcome of the twenty-first (21st) century depends on those who participate in it, on my students in the U.S.A. as well as those who now attend VMU. It seems to me that a few important features of this epoch are already evident. First, the technical progress that is shrinking our planet indicates increasing unification with regard to customs, fashions, leisure pastimes, and entertainment, and concomitantly a decrease in differences among nations. Moreover, there is an appearance of “global consciousness”, an awareness of the threat of environmental destruction. Second, we may notice signs of a deep and long-lasting spiritual crisis looming over our future. Having pondered and written about this issue for years, I could discuss it at length; suffice it to mention that at the end of the nineteenth (19th) century, Friedrich Nietzsche prophesized the onset of “European nihilism”, and it would be difficult to prove that he was mistaken.

While living on the Pacific Coast, I used to be asked what Lithuania meant to me. I would answer that, first of all, it was synonymous with the colors, forms, and fragrances of my child-hood. For no matter where we wander, in what countries we settle, the strongest impressions are those we received early on, upon first discovering the world. California landscapes are hardly reminiscent of the Nevėžis valley, where I was born. California is dry, sun- drenched desert, where agriculture depends on irrigation systems. Even forests in this state resemble desert overgrown with trees. Nevertheless, while I guarded Lithuania’s gentle landscape in my memory- green fields, hillocks, woods, rivers- I could not help pulsating with me grandeur and austerity that flowed in my veins until at last these images merged and coalesced with California scenery in my poetry.

Thus Lithuania was nature for me, but not only nature. I spent my school and university years in Vilnius, by which I was generously rewarded. Vilnius was a city of several languages and religions, with Catholic and Evangelical churches, Russian Orthodox churches, Synagogues, a mosque, and Karaite Kenese. In this city, I learned to understand a variety of sensibilities and grievances that separate groups of people. Each of us belongs to a particular linguistic and religions group; much imagination and mindfulness are required to empathize with another way of thinking that might often seem illogical to us. The lessons that I learned in Vilnius convinced me that I gained much by growing up in such a diverse and colorful environment- more than those who come from a culturally uniform community.

I was destined to emigrate from Vilnius for life. In the summer of 1940 and a few weeks after, when the Soviet army occupied the city, I crossed a few green borders and became one of its numerous dispersed inhabitants- some of whom were deported to the East, some sought refuge in the West, and some were murdered. About fifty-two (52] years have passed since that moment. In my travels through various countries I was guided by my youth in Vilnius, which I had no reason to forsake. Acknowledging Lithuania’s historical right to Vilnius, I always wanted my university town to surpass the reputation of a province, and now I can express my joy that it has become one of the Europe’s capital cities, I believe, with a great future. Wars, attacks, and imperial walls obstructed European Union; nonetheless, something bore witness to the continent’s unity- its architecture. The baroque splendor of Vilnius confirms that unity, and I am certain that tourists from many lands will flock here like pilgrims, as to Prague or other parts of the continent renowned for beauty. However, I think that the international spirit of the city, the spirit of its builders and its poets, will exert considerable influence and that this capital might well become a magnet and intersection for the creative activity of neighboring countries as well as the entire European community.

Standing here in front of you, I cannot but remark on the tasks I have set for myself as a Polish poet. One of these is an effort to replace conflicts between the two countries [Lithuania and Poland] with good neighborly relations, the primacy conditions of which are the inviolability of present-day borders and an acknowledgment of the values of international law. Because I know the history of our European region, I understand that the past is forceful and often returns in the form of timeworn proverbs and vague fears. Nevertheless, I am convinced that time is not on the side of the past. Although many past-communist countries are experiencing paroxysms, resulting even in wars, the unification of our planet (noted above] will continue, and in the broad view, one must consider relations between the Baltic countries, Poland, Byelorussia, and the Ukraine.

I think that Oscar Milosz would be pleased to hear what I am saying today. Did he not defend Lithuania’s rights in an international forum and consider the Baltic countries an important part of the future European Union? So I find myself here after fifty-two years: a return almost unimaginable, especially for young people. I can ascertain that it is a very complex and difficult experience, in which joy is fused with sorrow. My memory elicits numerous faces and persons who are no longer here but whose nearness I feel almost physically. Thinking also of them, I accept this honorable award. 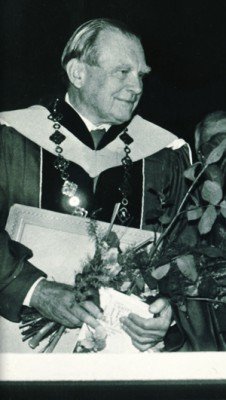