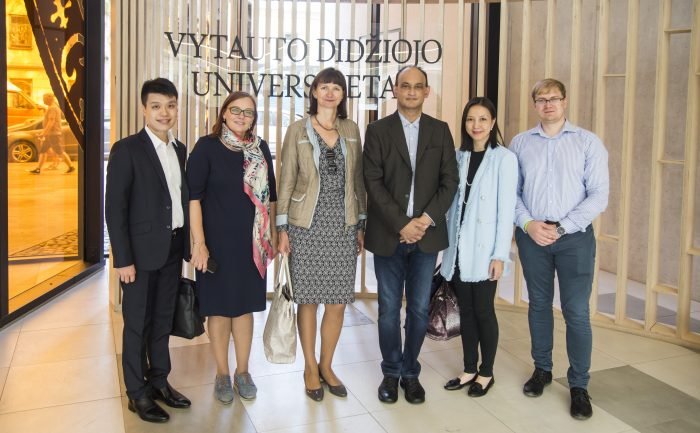 On 5 September, VMU was visited by a delegation from Lingnan University (Hong Kong). During the visit, the guests got acquainted with the VMU Research and Study Centre and met with VMU Rector Prof. Juozas Augutis, Vice-Rector for International Relations Prof. Ineta Dabašinskienė, and the team of the International Cooperation Department. Both VMU and Lingnan University organize studies based on the model of liberal arts.

“We have been cooperating with Lingnan University since 2015. This partnership is based on a very affable relationship. Every summer we receive students from Hong Kong at the Baltic Summer University. This year about 40 youths came to spend their summer in Kaunas and attended various courses. The number of the arrivals has been increasing annually and this trend confirms that they are satisfied with our academic environment and quality of studies”, VMU Vice-Rector for International Relations Prof. Ineta Dabašinskienė said. 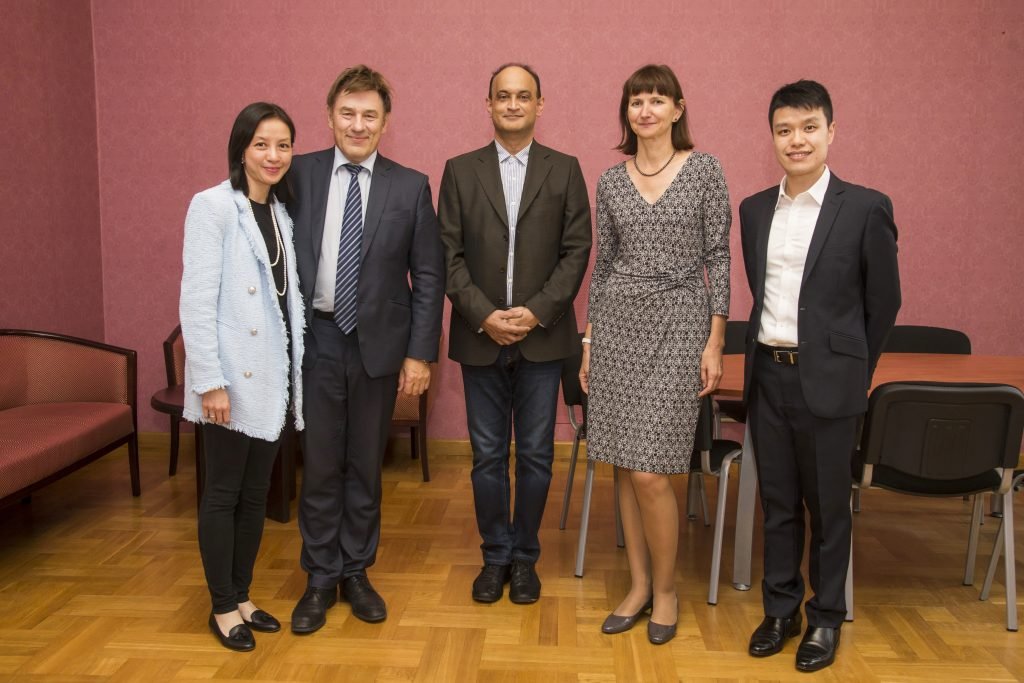 Thanks to this visit, VMU continues to consolidate its position as an institution which has exceptionally strong ties to East Asian universities. VMU representatives have visited Hong Kong last November, when Lingnan University organized a conference of global liberal arts leaders. According to the vice-rector, this Asian higher education school is highly active as a centre which unites many liberal arts institutions in Asia and focuses heavily on top-quality research. Lingnan University has various partners around the world and, simultaneously, plays an important role locally, in Hong Kong’s higher education system.

“In Hong Kong, state universities are divided by profile: comprehensive, technological, and humanities. Lingnan University represents liberal arts studies, so having such a partner is highly significant, taking into consideration that international relations in that country are one of the main factors. For this reason, signing contracts is not easy and competition is strong”, Prof. Dabašinskienė explained.

According to Lingnan University’s Associate Vice-President (Academic Quality Assurance and Internationalisation) Prof. Shalendra Sharma, cooperation is expected to be especially fruitful in the fields of social sciences, the humanities, and areas that are Hong Kong’s strongest points: international finance and economics. The guest also emphasised the need to develop the field of harmony and sustainability of nature and the environment, as these issues are highly important not just to Lithuania or Hong Kong but to the entire world as well.

According to Prof. Shalendra Sharma, while the liberal arts model of studies is not as popular in Asia or Hong Kong as it is in the United States, the university is glad to have the partnership with VMU. Lingnan University hopes that this cooperation will not only contribute to higher quality of studies or research but also raise the students’ awareness of various subjects and encourage broad thinking, creativity, and creative innovations that can have a far-reaching impact not only on today’s youth but also on future generations. 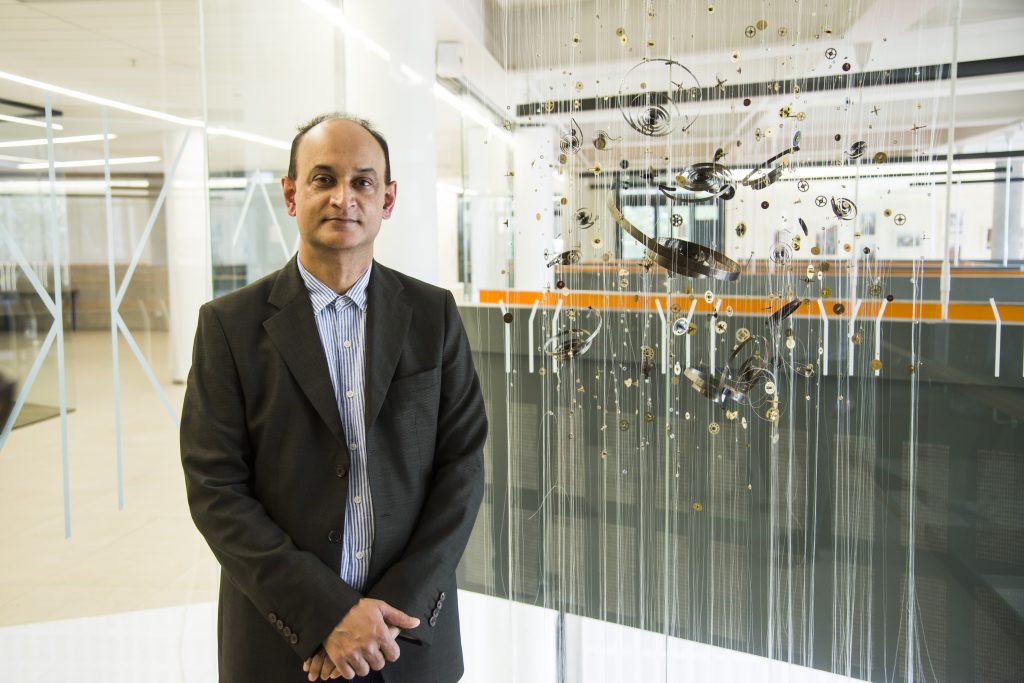 “One of our main goals is to ensure that Lingnan University students see the world, so we are glad that, for a number of years already, they have been able to visit Lithuania and discover its culture and its people. At the same time, however, we encourage students to not just make friends or explore the country but also to learn, because Hong Kong, like Lithuania, is a small country and does not have special resources, so our main future resource is the people”, Lingnan University’s Associate Vice-President noted.

Prof. Shalendra Sharma explained that the most popular and in-demand study programs in Hong Kong are related to business and innovations. “Students want to get a good degree here and find a high-ranking position in the job market, the business market, but at the same time they care about the world, because, in spite of its size, Hong Kong is highly international. In this respect, liberal arts play a highly important role because they promote understanding of different cultures, history, and the world at large, encourage tolerance and develop the responsibility of a global citizen”, the professor said.

Vaidas Dačiola, Chief Specialist at the VMU International Cooperation Department, pointed out that so far the number of applicants choosing Hong Kong for international exchange has been comparatively modest, in contrast with Japan and other countries that attract the eye of those interested in the Asian continent. “Many are concerned about their original hieroglyphs or other cultural peculiarities, but there is really no need to worry. One third-year BA student of Sociology and Anthropology at VMU spent an entire academic year at Lingnan University and had no difficulties with either the studies or the accommodation”, Dačiola said.

East Asia: the Region of Key Partnerships for VMU

During their visit in East Asia last November, VMU representatives made trips to three universities in South Korea. Two of them, Korea University and Kyung Hee University, are VMU’s partners already, so the discussions with them focused on new initiatives and joint projects. A new memorandum and exchange contract were signed during the visit at the Seoul National University (SNU). This agreement is of particular importance to Vytautas Magnus University and Lithuania, because SNU is one of VMU’s strongest partners in terms of scientific research: it is South Korea’s most prestigious university which ranked 36th this year in the QS World University Rankings and 11th among Asia’s universities.

“VMU has always been highly focused on internationality: currently the university has partners in over 50 countries of the world and is among the regional leaders in this field. We are especially glad that the long and diverse list of our partners has no shortage of East Asian universities that stand out as particularly advanced and competitive globally”, VMU Rector Prof. Juozas Augutis said.

According to VMU Vice-Rector for International Relations Prof. Ineta Dabašinskienė, VMU’s development of strategic partnerships  in the East Asian region is an important task that has been successfully managed so far. “The signing of the contract between VMU and SNU was the result of systematic and consistent actions taken with the aim of improving the quality and internationality of higher education. Based on this memorandum, the scientists from both countries will be able to participate in joint research projects. Also joint student and lecturer exchange, as well as joint study programmes, will be conducted”, the vice-rector emphasised.

Vytautas Magnus University will conduct studies and research related to South Korea, develop regional competences associated with this country, and share the best practices and scientific and study material relevant to it. The universities also intend to cooperate by establishing an institute of Korean studies in Lithuania.