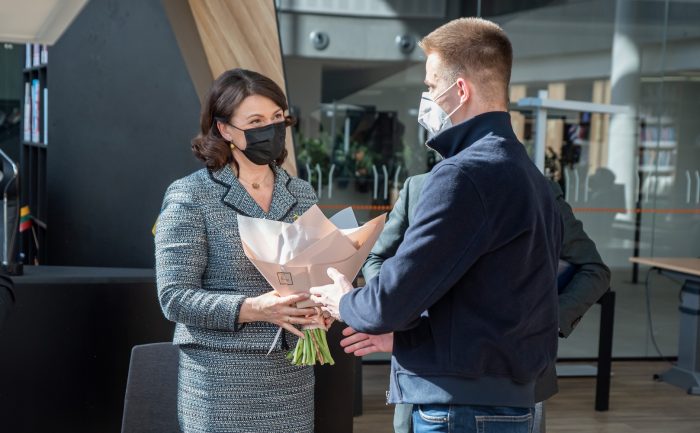 On 31 March, Vytautas Magnus University (VMU) was visited by the first lady of Lithuania, Diana Nausėdienė. During her visit, the guest met with Ukrainians studying at VMU as well as the university’s rector and community.

Addressing the audience, the first lady noted in her speech that currently all thoughts of the world are focused on Ukraine. “Today billions are grieving and suffering the horrors of the war together with Ukraine and, most importantly, joining the resistance movement all around the globe, opposing military aggression and seeking to defend Ukrainians’ right to live. This right is natural”, Diana Nausėdienė said. 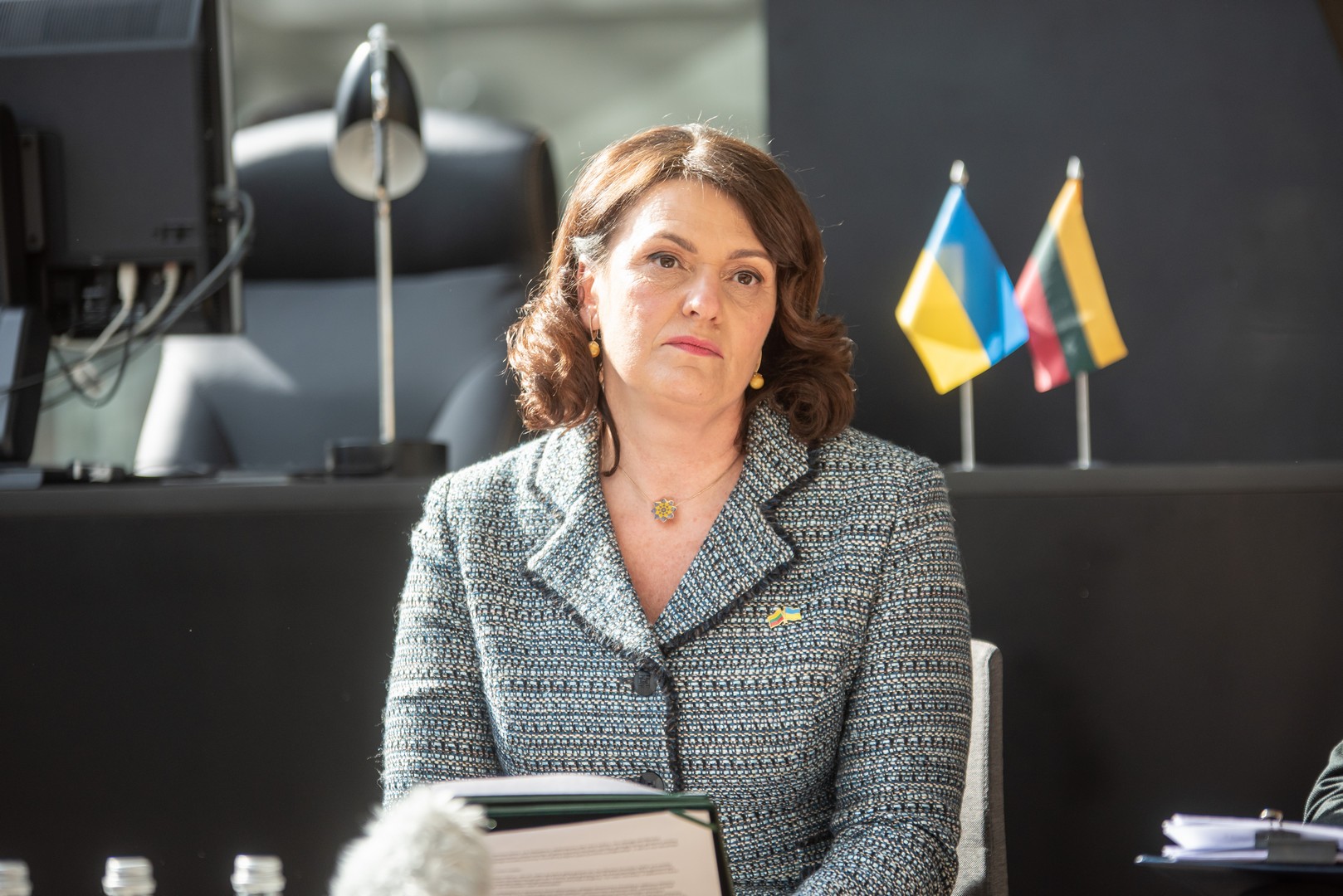 During the meeting, VMU Rector Prof. Juozas Augutis expressed delight that the university has received attention from the first lady and the President’s Office and shared information on the wide-ranging support provided to Ukrainians by the university. Currently, VMU has about one hundred Ukrainian students and about 10 lecturers from Ukrainian universities.

“We are glad to be able to contribute to the support, to raise the spirits of the Ukrainian people who have arrived. I believe that our community will do their best to take care of you. Don’t hesitate to ask for anything you need, we will lend you a hand”, VMU Rector said.

Ukrainian students also spoke at the meeting. Yulia Matiiuk reminded the audience that Ukraine and Lithuania have had a similar history for many years: they both sought to free themselves from the same oppressor in the East, became independent states during the interwar, and later suffered from painful occupation. The student thanked Lithuania for its continued support ever since the start of the war in 2014. According to her, on 24 February, the life of every Ukrainian was divided into “before” and “after”.

“All Ukrainian students at VMU were touched by the desire of the First Lady of Lithuania to hear us. After the full-scale invasion by Russian troops, Lithuania has even more strongly supported us with additional military, humanitarian aid and assistance to refugees who have left Ukraine. We truly thank you, First Lady of Lithuania, President of Lithuania, and the Seimas of Lithuania, for your help to our country in this difficult time for us and we thank every citizen of Lithuania who is helping our military, our immigrants, our people. We bow our heads to every soldier of Ukraine who, at the cost of his own life, defends our land from the enemy”, Matiiuk said. 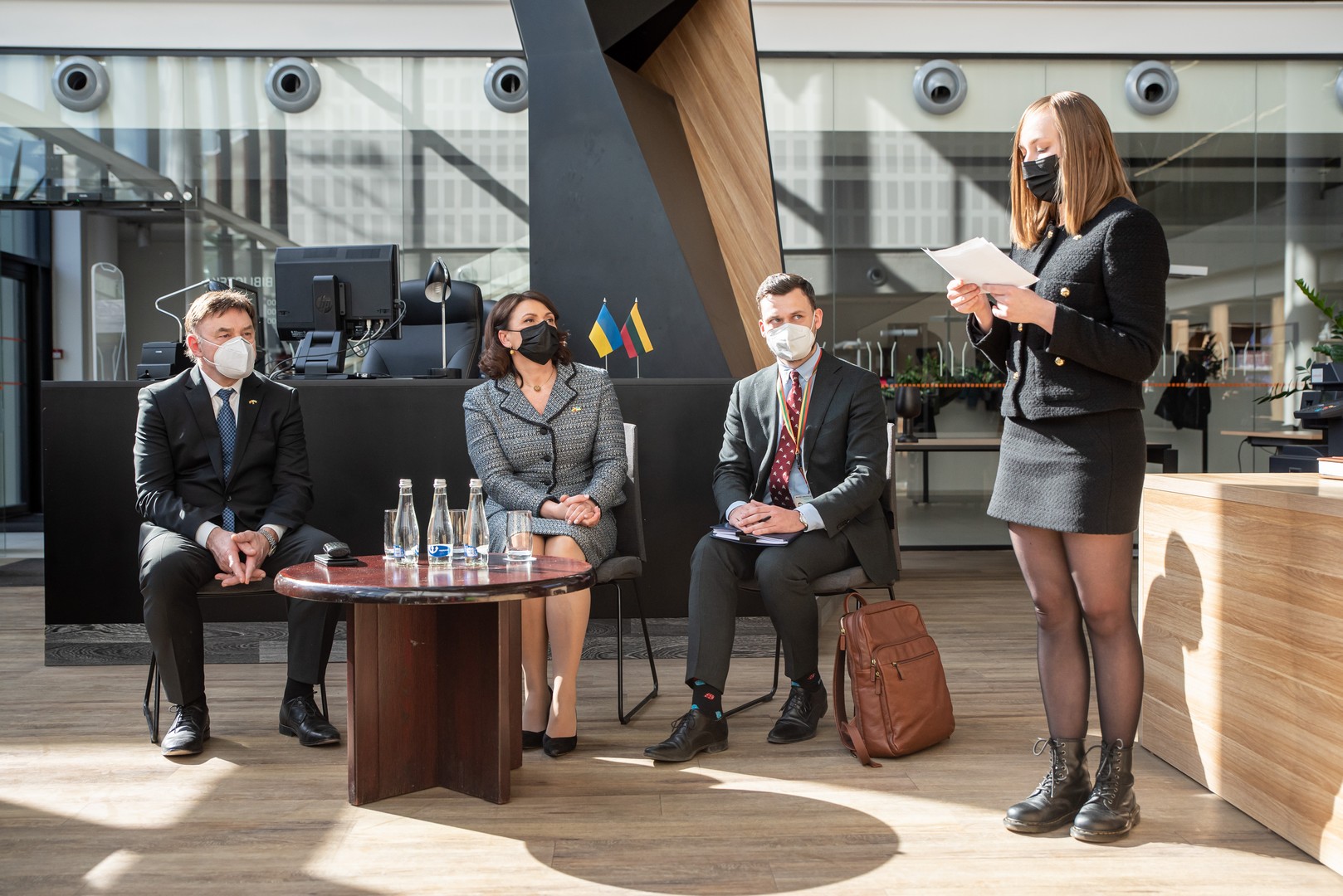 The student also thanked Vytautas Magnus University for its support, free-of-charge university places for Ukrainians, scholarships, and housing for the families of students who fled the war. During the first week of the war, Yulia Matiiuk and her friends initiatied collection of medicines for the needs of Chernihiv. This initiative was supported by VMU students and administration.

For the people of Ukraine, Vytautas Magnus University offers financial support, accommodation, psychological consultations and other aid. Since the start of the war, VMU has already welcomed several dozens of Ukrainian students and is prepared to welcome a few hundred of them. Ukrainians are showing keen interest in free-of-charge courses of Lithuanian language at VMU: 158 citizens of Ukraine have already applied for the opportunity to attend them in Kaunas, about 200 more of them are interested in attending them in Vilnius. The courses aim to develop the learners’ Lithuanian language skills which will be useful to them while living in Lithuania.

The university also offers courses of Ukrainian language. It is taught with the help from volunteers: Ukrainians studying at VMU, graduates, and war refugees. VMU students from Ukraine also have the option to take special English language courses (B1 and B2 level groups) and join informal language learning activities: a “café of languages”, where various languages are used in an informal environment, and tandem learning of languages (in pairs).

Those who wish to support the academic community of Ukraine are welcome to contribute to the support fund established by VMU.