Exhibition by VMU Professor Opened at the House of Signatories 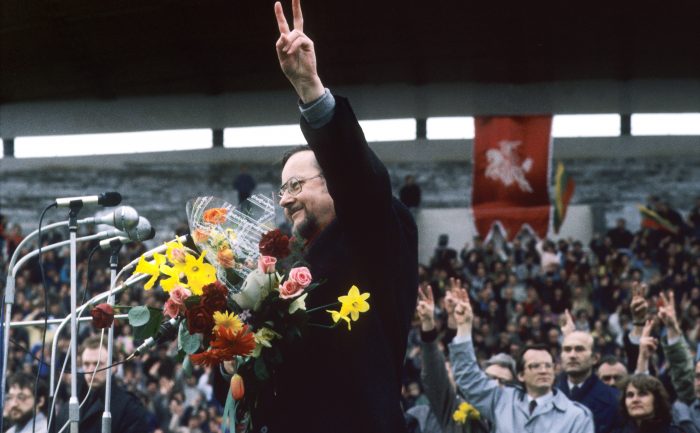 On January 7, a photo-video exhibition “To Destroy the Empire of Evil” by professor and photographer at the VMU Department of Contemporary Arts Romualdas Požerskis, and film director Sergei Loznica, was opened at the House of Signatories in Vilnius.  Two famous creators are inviting to take a look at the years of great significance for Lithuania and remember the events that led to the liberation of our country and laid the foundations for the collapse of the Soviet empire.

The exhibition presents photographer Požerskis’s unique shots of invaluable documentary value, which capture dramatic historical events in Lithuania –  from the first rallies of the Lithuanian Reform Movement Sąjūdis to the withdrawal of the Soviet army from Lithuania. The photographs capture not only the painful events for our country and the experiences of their participants, but also the emotions experienced by the photographer himself at that time.

In the photo-video exhibition, film director Loznica invites to go on a cinematic journey exploring this important period for Lithuania. Excerpts from his latest film “Mr. Landsbergis. To Destroy the Empire of Evil“, will take visitors of the exhibition back to the period of 1988-1993. From unique and never-before-seen archival material, the director constructs a story about the bravery and determination of the Lithuanian nation, which was demonstrated to the whole world more than thirty years ago.

“It was truly interesting for me to study Požerskis’s photographs, which depict the moments of Lithuania’s path to independence. These are brilliant shots that, together with the fragments of the film, invite us to rethink and appreciate the dramatic experience of the Lithuanian nation and its crucial role in the collapse of the Soviet Union,“ says Loznica.

“During the collapse of the Soviet empire, the House of Signatories, which was closely monitored by security forces and guarded by military units, became a place that united the Lithuanian nation with the idea of ​​the country’s freedom. In the context of today’s geopolitical events, the idea of ​​Lithuania’s freedom is important in fostering fundamental Lithuanian and European values, such as democracy, the rule of law, civic self-awareness, freedom of society and the individual, and human dignity. Therefore, it is very symbolic that this exhibition is opened at the House of Signatories, where the independence of Lithuania was proclaimed on February 16, 1918, restored on March 11, 1990 and bravely defended on January 13, 1991. We are truly delighted that the visitors of the exhibition will be able to look at important historical events through the eyes of two prominent creators – photographer Požerskis and film director Loznica,“ says Rūta Kačkutė, the Director of the National Museum of Lithuania.

The exhibition “To Destroy the Empire of Evil“ will run at the exhibition hall of the House of Signatories everyday from January 6 to January 20, excluding Mondays.

Loznica’s documentary film “Mr. Landsbergis. To Destroy the Empire of Evil“ will be released in Lithuanian movie theaters on January 13.