Prof. Kęstutis Skrupskelis was born in Kaunas, in the family of one of the most interesting pre-war journalists Ignas Skrupskelis and the literature scientist Alina Skrupskelienė. His academic specialty is the history of American philosophy and research and editing of philosophical texts. The professor taught philosophy at the University of South Carolina (USA) and Vytautas Magnus University and is currently the Professor Emeritus in Philosophy.

In 1991, Prof. Skrupskelis started teaching philosophy of education at the VMU Centre of Pedagogy, later in the Department of Education.

He contributed to the development of these divisions by sharing his experience and, over the first decade of the re-established VMU, introducing the community to advanced ideas about philosophy traditions and their relations to modern education practices in the USA. Prof. Skrupskelis gave philosophy lectures to master and doctoral degree students, teachers, etc.

The professor has also conducted archive research. He employed its methods in Lithuanian while reviewing the book Lietuvos Laikinoji Vyriausybė. Posėdžių protokolai (2001).

Prof. Skrupskelis is interested in the intellectual life of pre-war Lithuania, the history of the press, and the consequences of occupations on the development of political consciousness. He has written and published books, including Ateities draugai. Ateitininkų istorija iki 1940 m. (2010) and Vaikų žaidimas: „XX amžiaus“ karikatūros (2008), as well as a large number of articles in academic, cultural and other periodicals. 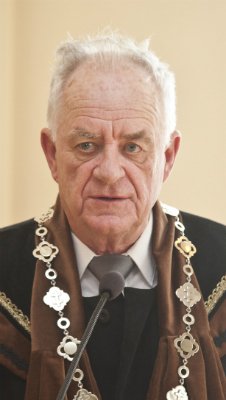