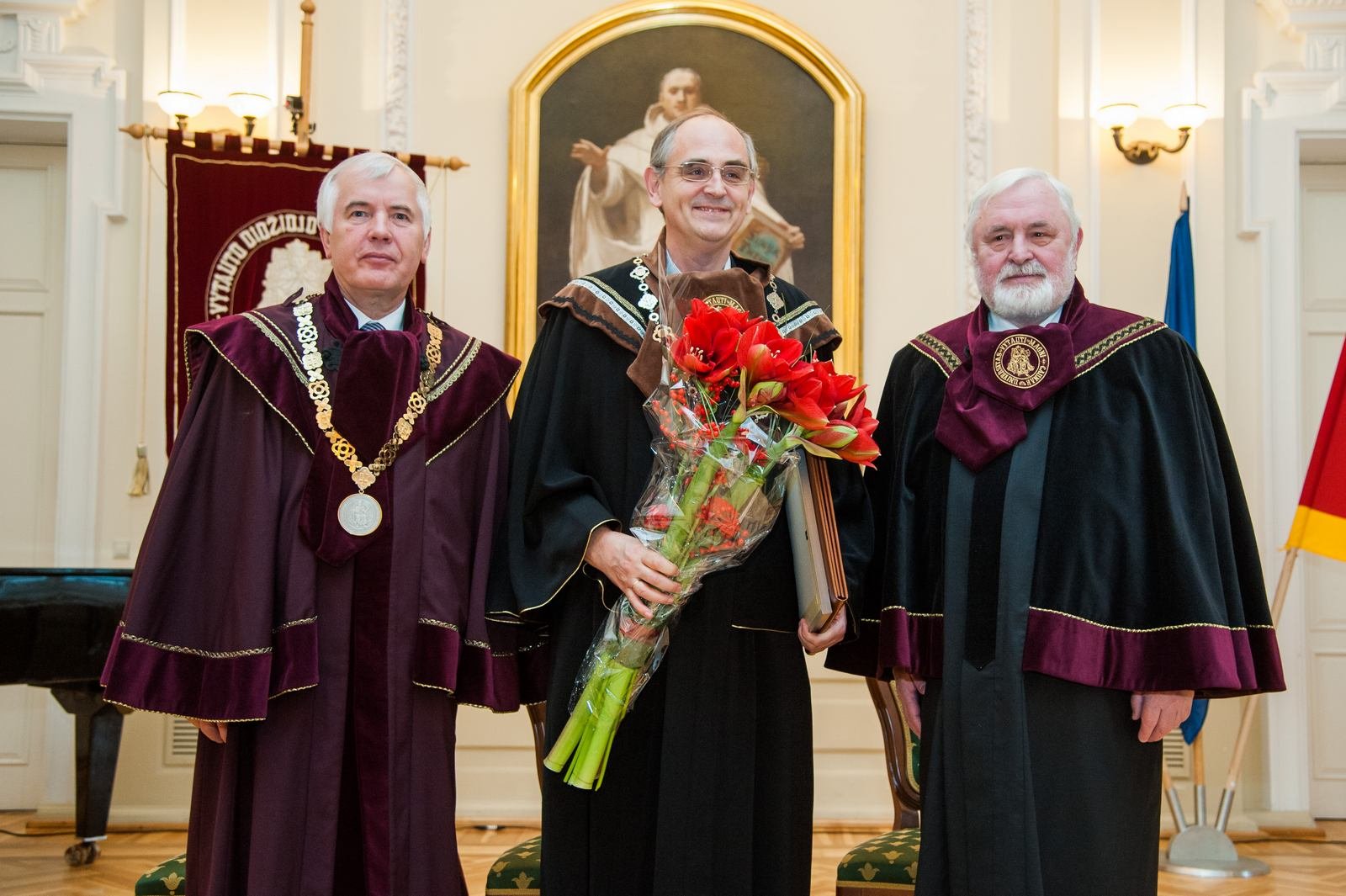 Lucas was awarded the regalia of the Honorary Doctorate in the festive meeting of VMU Senate by the university‘s rector Prof. Zigmas Lydeka. The analyst was honoured for his significant contributions to the support of freedom, democracy, justice and solidarity, as well as Lithuania’s development in the context of international affairs.

VMU Rector noted that ever since the reestablishment of Lithuania’s independence Lucas has been its friend and global ambassador in the wider sense of the word.  “The university’s community is pleased to welcome into its ranks an individual whose intensive international activities and high moral values inspire the academic youths to pursue knowledge and noble goals”, Prof. Lydeka said.

Iron Curtain Is Still There

The President of Lithuania Valdas Adamkus congratulated Edward Lucas at the ceremony as well, and expressed his delight that the British journalist received the honorary degree from VMU. “I think VMU is a cradle of independent science, where democratic ideas are boldly defended. That is what Edward Lucas does as well: with his honest words, he penetrates deeply through the former, or, in my opinion, still existent, Iron Curtain and fights for democracy”, Adamkus noted.

According to Dr. Oskaras Jusys, the Director of the United Nations, International Organizations and Human Rights Department at the Lithuanian Ministry of Foreign Affairs, Lithuania’s diplomatic corps frequently consult with Edward Lucas about foreign policy affairs: “His useful advice and consultations have proven valuable more than once, I hope for continued collaboration and support in the future as well”.

Prof. Šarūnas Liekis, Dean of VMU Faculty of Political Science and Diplomacy, underlined that Lucas has been analysing Central Europe and its political situation for more than two decades and has been strictly critical of the regimes throughout the entire period. “His becoming VMU Honorary Doctor will allow our students to attend the guest’s lecturers more often and discuss the current European affairs face-to-face”, the dean said.

A rich crowd of VMU community and media listened to Lucas’ public lecture Lithuanian Lessons, which he presented at the ceremony. In the lecture, the journalist spoke about the Baltic nation’s experiences and how the Western world has benefited from them. Lithuania may be a small country, he noted, but it has proven time and again that it’s able to fight for itself. Still, fighting remains something it has to do. In Lucas’ opinion, lately Lithuania has been a sort of front line between the West and Russia.

“Whether you want it or not, your country is a participant in the war of espionage, because the Russians and the Belarussians find Lithuania interesting as a means to access Western organizations and structures. The spies are particularly curious about the EU and NATO”, the analyst explained.

VMU Honorary Doctor Edward Lucas claims that Lithuania and the other two Baltic states have not only achieved freedom in 1991, but have continued to change and improve further, e.g. in comparison with Bulgaria or Romania. “Lithuania has a clear concept of what a state is and is not afraid to strive for it or declare it to the world. I am glad that your country is not running in place”, he said.

The journalist emphasises that while Lithuania has been a free country for over two decades, Vladimir Putin’s recent policies regarding Ukraine should be a signal that freedom is not a guarantee. “I am afraid that Putin will try to do something in the Baltic countries, because he understands that by destroying NATO’s reliability in the Baltics he would destroy NATO itself, which is very appealing to him”, The Economist’s editor has said a number of times.

The analyst maintains that Ukraine should serve as an example to Lithuania, as a similar situation could repeat in the Baltic country: “There is no need to panic, but you have to be prepared for a possible attack. You have to know what should be done in such a case, and how”, Lucas said.

Lucas’ insightful analytical publications on post-Soviet countries were instrumental in informing the West about the region’s problems. His works focus on Soviet and post-Soviet undemocratic activities, propaganda and other issues relevant in Lithuania and other countries in the region. The journalist has stressed numerous times that the West was wrong to ignore the concerns in Eastern Europe over Russia’s actions and encouraged the Eastern Europe and the West to unite against Russia’s aggressive and undemocratic policies.

At the end of his lecture, Edward Lucas admitted that while he is interested in the politics of the entire European continent, there is a special place in his heart for Lithuania and Kaunas, which he visits often. After receiving VMU Honorary Doctorate, the journalist said he feels even closer to the country now and will continue to strive even harder for common goals.

Edward Lucas (b. 3 May 1962) is a senior editor at The Economist, the world’s foremost newsweekly. His expertise includes energy, cyber-security, espionage, Russian foreign and security policy and the politics and economics of Eastern Europe. In 2008 he wrote The New Cold War, a prescient account of Vladimir Putin’s Russia. In 2011 he wrote Deception, an investigative account of east-west espionage. A forthcoming book is on cyber-security. He has also contributed to books on religion and media ethics.

An experienced broadcaster, public speaker, moderator and panelist, Edward Lucas has given public lectures at Harvard, Oxford, Cambridge and other leading universities. He is a regular contributor to the BBC’s Today and Newsnight programmes, and to NPR, CNN and Sky News. He is regularly cited by Foreign Policy magazine as one of the top 100 Twitterati.

For many years a foreign correspondent, he was based in Berlin, Prague, Vienna, Moscow and the Baltic states. He is currently in London, as the energy editor at The Economist, where he also writes obituaries. His weekly column for European Voice (Brussels) has appeared since 2005; he also writes for the Times, Daily Telegraph,Daily Mail, Foreign Policy and Standpoint.

As well as working for the Independent, the BBC and the Sunday Times, he also co-founded an English-language weekly in Tallinn, Estonia: the Baltic Independent. His undergraduate degree is from the London School of Economics and he speaks five languages — German, Russian, Polish, Czech and Lithuanian.