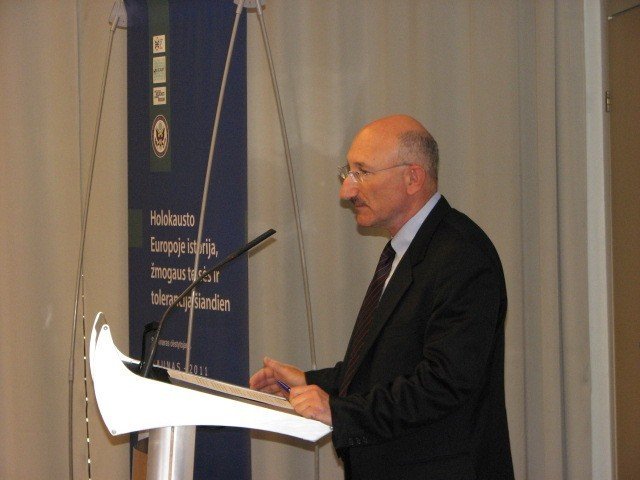 According to Cesarani, different nations have interpreted the events of the Second World War in differing ways: “The dominance of one particular version was dependant on the political constellation, political framework at certain times. The plurality of narratives reflects the shifting political frameworks in which the past was and is remembered as well as the fragmented population that was and is going to be remembering”. Illustrating this, the historian spoke about the murders of Jews in Lithuania, which are evaluated differently by its participants: “In the aftermath, the survivors nurtured a sense of victimhood and resentment or precarious triumphalism, depending on whether they were winners or losers”. The guest also emphasised that while there have always been multiple and conflicting narratives on the events in the Eastern Europe in the 1900s and beyond, for half a century the expression of these overlapping narratives was “mainly confined to the West” until the fall of the Iron Curtain after 1990.

David Cesarani underlined the fact that the history of each nation and even the entire region has been constantly rewritten: “I do not suggest that there is no objective version of events, nor do I want to imply that all versions are equally valid. I want to show that the plurality of narratives exists as a result of the varied experiences of different groups. It is precisely because there were perpetrators, victims, bystanders and, very importantly, grey zones, that there are different points of view. The pattern has changed dramatically over time, and it’s because of this that we are now faced with starkly conflicting accounts of the past”.

Afterwards, the historian spoke about the historiography of the Holocaust after the Second World War, remembering various theories, such as the statements of Marxists in the 1960s and 1980s: “Jews did not interest them very much. They treated ideology, including anti-Semitism, as nothing more than a smokescreen for the interests of the ruling class and big business”. Similarly sterile was the debate by the intentionalists and functionalists regarding the origins of the Holocaust in the 1970s and the 1980s, which according to Cesarani focused too much on, respectively, the persona of Adolf Hitler and structure-based research of the public and the economy, ignoring attitudes, beliefs and motives.

Significant changes in the research of the history of the Jews took place after the collapse of the Soviet Union. In the historian’s opinion, the changes were three-fold: the opening of the archives allowed research of different periods; subsequently, indigenous investigations arose; finally, after the disappearance of restrictions imposed by totalitarian regimes, the struggle of nationalist groups against the Soviets and Nazis was paid tribute and historical commissions were established.

After focusing on the Polish historiography of the Holocaust, David Cesarani complimented this country’s progress: “There are now several narratives of the period of 1939–1949 in Poland. It is a sign of political maturity and cultural inclusion. The very fact that from time to time the media rumbles with historical controversy is a mark of confidence that it is possible in Poland to teach and argue sensitive matters of history without worrying about political crises or street violence. This development offers a positive model for other states in the region. I’m not suggesting that things are perfect, but I think the evolution of this debate – through a very long period, fifteen years, at least – shows how it is possible to accommodate multiple narratives and to begin to develop respect for the narratives of other groups”.

Meanwhile, Lithuania is marked in the history of the Holocaust as the place important to the beginnings of this atrocious phenomenon: “The systematic murder of Jews in Europe began here, on Lithuanian territory, within days of the German invasion of the Soviet Union. In post-war Jewish testimony of memoirs, like those of Joseph Garr, great emphasis was placed on the role of Lithuanians in the early phase of killing. Garr wrote: “All sectors of Lithuanian society actively participated in the cold blooded killing of Jews. Farmers, workers, officials, and representatives of the intelligentsia all indulged themselves in an orgy of sadism against helpless Jews. Such was the desperate plight of Lithuanian Jewry at the outset of German occupation”. Historians have since maintained that the mass murder of Jews in the Baltic region could never have been accomplished without the intense involvement of the local population”, the English historian explained.

Lithuanians who collaborated with the Nazis during the Second World War were purportedly expressing their resentment of the Soviet regime. However, David Cesarani drew attention to the research by Christoph Dieckmann and other Lithuanian-German scientists which focused on the relation between the locals’ anti-Semitic and anti-Communist moods: “These historians have pointed to the intensification of nationalism in the independent Lithuania in the interwar years, illustrating the emergence of organic conception of Lithuanian nationalism that excluded Jews, Poles and other minorities, illustrating economic resentment against Jews, nationalist anger against Poles and the admiration for fascism and national socialism. This new historical research argues that the occupation of 1941 only intensified these underlying trends and led to the coalition between Germans and Lithuanians directed against the Jews”.

Summing his presentation up, David Cesarani pointed out that historians researching the different German occupation policies in the Baltic region, Poland and Russia have made significant discoveries since the 1990s and started to better understand the different experiences of the groups amongst the occupied: “The simple triad of perpetrator, victim and bystander has fallen apart. At one point, the perpetrator could become the victim, such as the fate of ethnic Germans at the end of the war. Bystanders and victims could be perpetrators too, such as the Poles at Jedwabne. Above all, we are now able to see numerous ethnic cleansing campaigns, unparalleled overlapping genocides. It is no longer a simple competition of victimhood. With such a plurality of interlinked catastrophes, the best we can do is try and understand the timing, the demographic stroke, the social composition, the geographical extent of each atrocity, and only then to seek the relationships between them, what unites them and sets them apart, which were not all the same. This period, this place saw atrocities on unprecedented scale that had never been surpassed and impacted different groups at different times. They shared many characteristics, but they did not have the same origins or consequences and were not all the same”, the scientist concluded.

You are welcome to view the photo report by Jonas Petronis (jonas.petronis@vkt.vdu.lt).